NCT or National Childbirth Trust is a UK based charity which aims to support parents. give impartial advice and introduce people to their local parenting network, in turn giving practical and emotional support.

“Our vision is of a world where no parent is isolated and all parents are supported to build a stronger society.”

They run both antenatal and postnatal courses, the course content depends on which course you choose to attend. There are 3 different antenatal classes, I chose to go to the “signature” classes, which covered everything from birthing options to breastfeeding, we spoke a lot about having a positive labour and birth, taking control and being informed.

You can buy preloved items at the regular “Nearly New Sales”, I have not been to one of these events yet, but have heard they are really great.

There is an abundance of amazing and honest information on their website and facebook pages, you can join your local NCT facebook group to find out about events and opportunities in your area.

One of the events run by volunteers at NCT is “Bumps & Babies”, these meetups are a great place for Mums to meet other Mums, to talk about the highs and lows of parenthood. In my surrounding area, there is a different meetup on pretty much every day of the week! The meets are spread across the county and are often at local cafes, free of charge. You literally just pay for your food/drink!

Baby groups do not need to be expensive, although it is not a baby class, it is a great place to meet other Mums and babies, ask for advice, share and enjoy some cake. 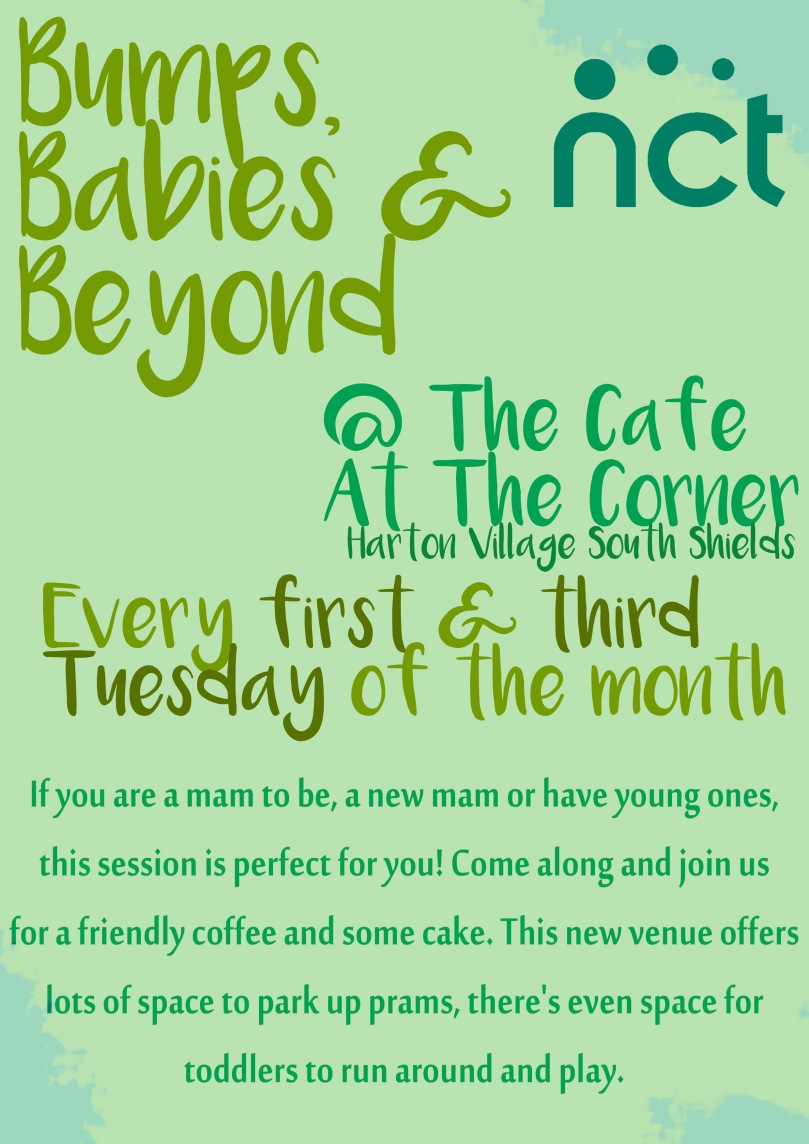 Today, I am going to my local Bumps & Babies meet at The Cafe at the Corner.

We have had highs of 35 Degrees Celcius in the UK recently, something we really are not used to! Although now it is cooler and the sky is grey, the hot weather is set to return next week. It is extremely important to keep little ones cool. Here are some things that we have been doing to stop Izzy from getting too hot.

Lots of fluids! Breastfeed more often, when the weather is hotter and baby needs more to drink, our very clever bodies change the makeup of our breastmilk to meet our babies needs. If your baby is formula fed, you can give water (cooled boiled if under 6 months) between their normal bottles.

Give refreshing snacks (for babies over 6 months) such as cucumber sticks or a breast milk ice lolly.

Thin, loose clothing, such as a loose dress or a t-shirt which is a little bit big. When it has been very hot, you might even want to forget about the vest. On a night time, Isla has been sleeping in just a nappy & sleepsuit/vest (depending on the temperature in the room) with a very thin blanket.

Do not cover pram with anything, it might seem like you are doing good by keeping the sun off your baby, however, it can be extremely dangerous, as it actually makes it hotter in the pram for your baby, it prevents the air from circulating. I found this graph from Which? extremely helpful. 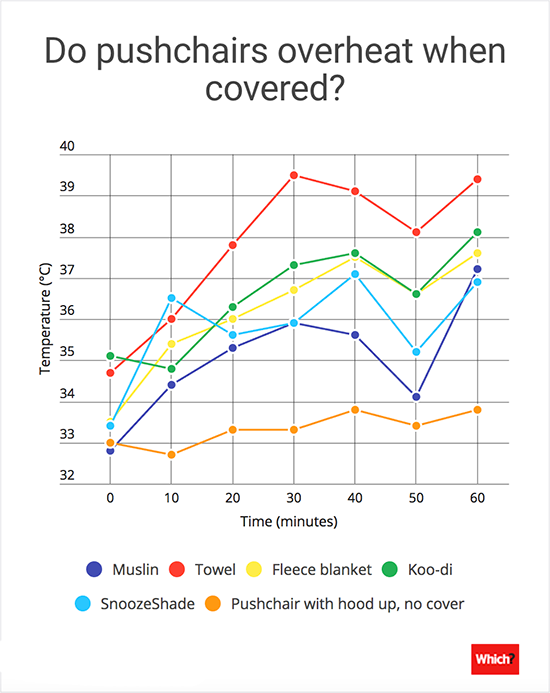 Keeping your baby in the shade and try to avoid going out during the hours of 11AM-3PM, as this is when the sun is highest in the sky and therefore the hottest time of day.

Close the blinds. Open the windows. Keeping the blinds closed during the day can help keep the room cool and opening the windows will create a through draft.

A cooler bath before bedtime can keep baby at a nice temperature. Try and do relaxing things before bed, so that baby does not get worked up or excited.

The weather was great, with temperatures around 25 degrees Celcius. I had arranged with Isla’s Dad to meet in Sunderland on Saturday. So, we got up nice and early and had our breakfast. I put suncream on Isla and a gorgeous little romper from The Disney Shop. It takes us about an hour to get to Sunderland, Isla was due to have a nap and I really thought she would sleep during the journey. She fell asleep minutes before we pulled into the last stop in Sunderland, luckily I had to return a top to New Look that I had bought in the sale but didn’t quite look right. I met Isla’s Dad and we went to New Look, I chose a new top. After I’d finished in New Look, Isla’s Dad called his family and asked where they would like to meet to see Isla. 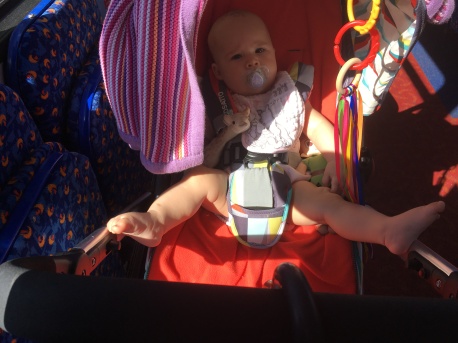 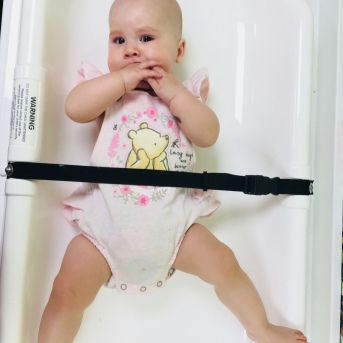 After meeting with Isla’s Grandparents, we decided to get some lunch and go to the park. There is a lovely park just a 5 minute walk from Sunderland city centre, it has a pond with ducks and swans, a little play park for children, lots of nice places to sit. We got a Subway (Isla’s Daddy’s first time ordering a Subway – quite funny to watch) and sat on a bench in the park. Isla had sweet potato, carrots and peas for her lunch. After lunch, we sat on the grass, trying to stop Isla from eating all sorts off the floor. It was a lovely day out. 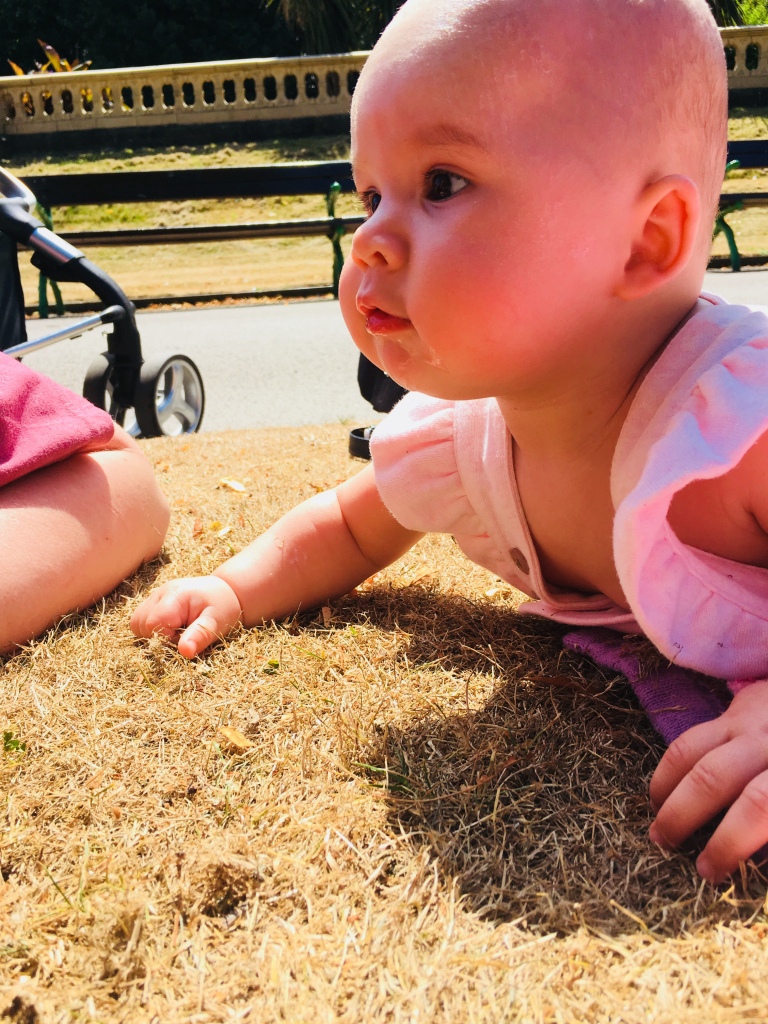 On Sunday, we had plans to go to Bents Park, which is down by the seafront in South Shields. The council put on “The South Tyneside Festival” throughout the summer, in the month of July they have bands and musicians playing on a huge stage in the park, this happens on four of the Sundays in the month. This Sunday was the first week, performing was, Jen Stevens (a local artist), Phats & Smalls (they had one song in the 90s), Aston Merrygold (from JLS), and Pixie Lott (I’m sure you’ll have heard of her). 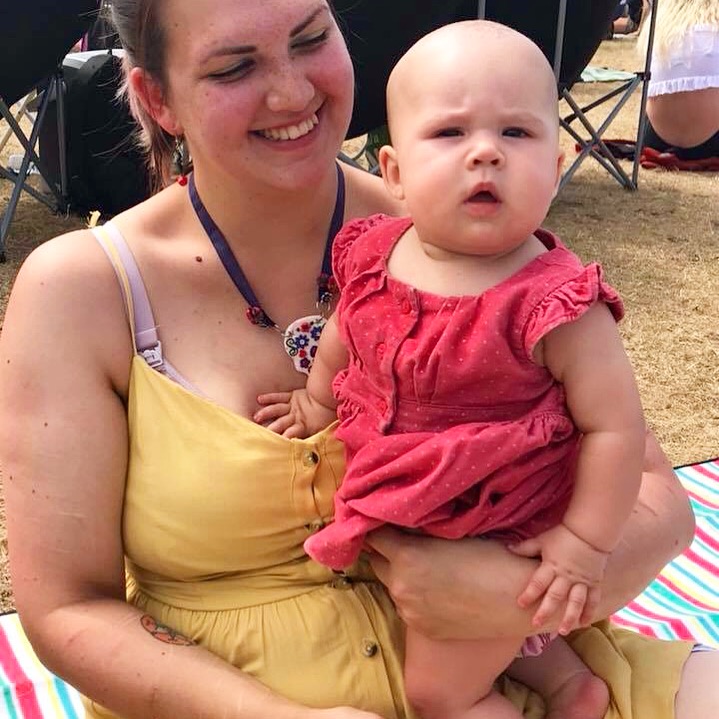 I am not going to lie, I was a bit nervous about going with Isla. The idea of all those people coming over to “chat” with her, the loudness of the music and judging how hot it had been in past days, it was going to be a scorcher. It obviously, was not as bad as I had imagined… It never is! Yes, it was loud, and it felt like everyone wanted a turn at holding Isla, but maybe it was quite nice to have a little break, some me time, baby-free, adult time. I sipped on Rekorderlig and enjoyed the music. 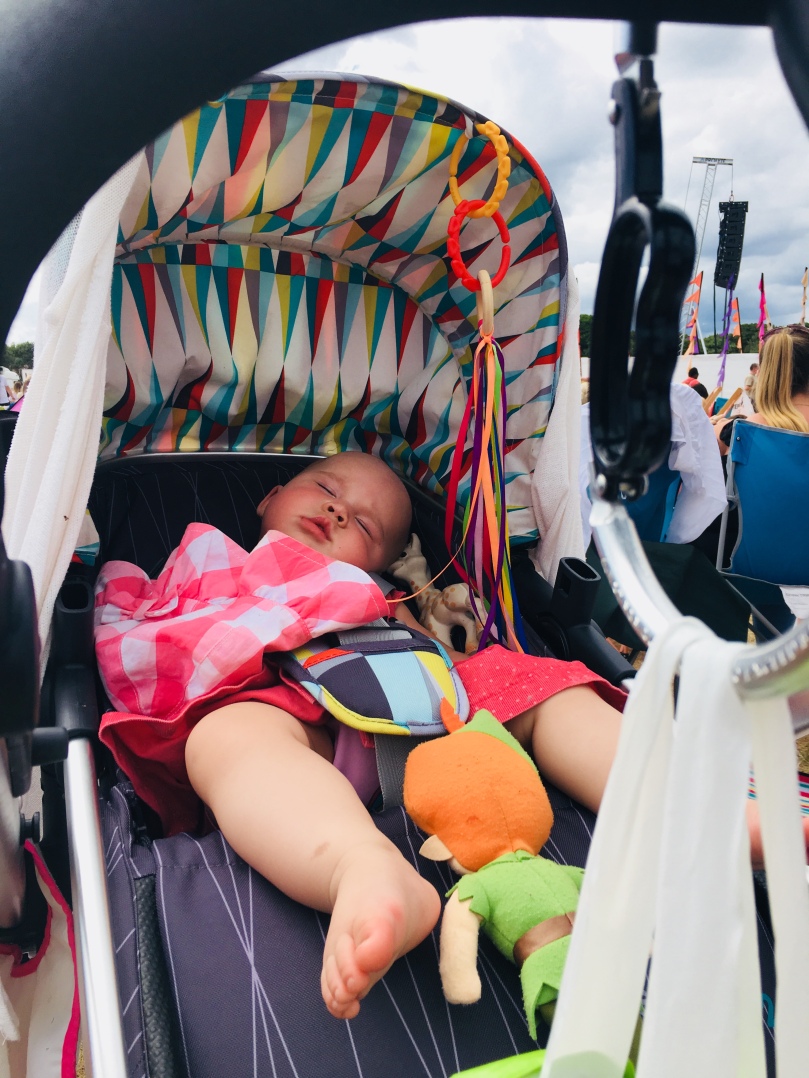 Isla was not bothered in the slightest by the loud music (as you can see in the photograph above… Ha!) She loves getting attention off people, so she also didn’t mind being passed around. I enjoyed the day, however, it did get really hot and now I’m sunburnt!

I wasn’t sure if I would be able to meet up with my Mummy friends today as I had to wait for an engineer to come out and set up my phone line so I could get internet, (woo, finally I have internet in the flat!) my time slot was 1PM-6PM, my Dad was also popping round on the morning to fit some blinds for me. The other Mums were meeting at South Shields Metro for about 2PM.

There was a knock on my front door at 8:20AM, I went to answer the door with Isla, saying “is this your Granddad?” on the way down the stairs. I was surprised when I opened the front door and it was the engineer! He got started, then 10 minutes later came and told me that he had a lot to do, he needed to do some stuff outside and then he would come back. Then there was another knock on the door, this time it was Granddad. He hung my blinds and fitted a baby gate on the living room door, then we had a coffee and he played with Isla a bit. The engineer was done, my Dad left, I got me and Isla ready.

It was coming up to 1PM, I got the bus and met the Mums. The plan was to walk along the coast, but five babies all in different routines meant we had to make a few pit stops. We stopped at Cafe Nero before setting off to feed the babies and enjoy a coffee, unfortunately these days it is quite hard to feed Isla as she is just so interested in the world around her, she is too easily distracted.

And off we went, we walked along Ocean Road, and then through Marine Park, and down toward the beach. We talked about all sorts from the steam train in the park to local restaurants. The babies fell asleep while we walked.

We walked along the beach, and stopped again at The Sanddancer, we ordered some chips and fed the babies, they had a play about, babbled and giggled at each other. The Mums spoke about having a night out (which we all need and deserve!) We talked about weening, breast feeding, possibly giving formula, sleeping patterns and everything else.

We went on our way, but Isla would not settle, I knew the sling would come in handy. I pushed the empty pram while Isla watched the world go by from up a height, she was much happier in the sling. We walked a bit further, and stopped at a bench then decided to head back, as it was already 5PM and most of the Mums had to get a metro back to Sunderland.

Isla slept all the way back to the bus station. The weather was not the greatest, but we really enjoyed getting out in the fresh air.

Yesterday, me, Isla and her Dad went for a walk around the park next to my new flat. The sun was shining and the birds were singing. We walked the winding paths until we came to the play park.

There were other Mums, Dads and Nanas there with there babes, playing on the swings and slides. Which gave us an idea, we wanted Isla to have a turn on the swings, her first turn on a swing. She sat in the swing with a blanket stuffed in as she is still so petite. 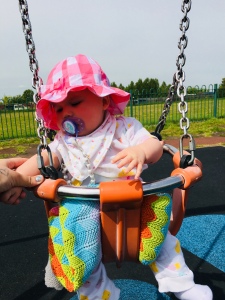 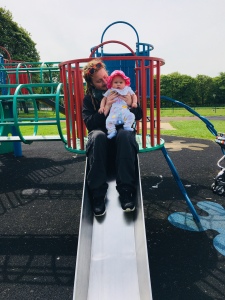 After that, we walked back around the park again, showing Isla the different flowers and trees. Her Dad told her that one type of flower was actually a fairy dress and that was how they hung them out to dry. Isla fell asleep while we walked back home. 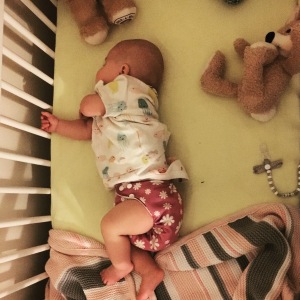 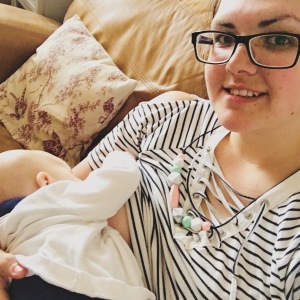 I’m Jade, artist and Mum to Isla. In 2017, I graduated from The University of Sunderland with a Bachelors Degree in Fine Art, I also had my beautiful baby girl in 2017.

Documenting mine and Isla’s adventures in life, along with lots of other stuff too!